Tune in tonight (10:30pm EST) to 1210 AM and listen to Jamie Moyer’s interview with Rick Grimaldi. Jamie will be discussing his new book, “Just Tell Me I Can’t” and talking about Camp Erin and Camp Mariposa.
Here is the link to listen live:
Click Here to Listen In

A little sneak peek about the book which will be released this Tuesday!
Jamie Moyer started pitching in the majors in 1986. An All-Star and a World Series champion, Moyer is only a few wins shy of 300. At the age of 49, he became the oldest pitcher to win a major league game and he still hasn’t officially retired at the current age of 50. His new book is filled with behind the scenes, anecdotes and the insights gathered off the field that helped Jamie become an elite pitcher in an era when the odds were stacked against him. “Just Tell Me I Can’t” launches on September 10, 2013 and is written with Larry Platt, former editor of the Philadelphia Daily News.

In 2002, Moyer and his wife, Karen founded The Moyer Foundation to help children facing some of life’s biggest challenges. Over the years, the bravery exhibited by these children has been a profound source of inspiration and perspective for Jamie as he worked to conquer his own fears and persevere throughout his career. This emphasis on hope and strength in the face of difficult odds is the defining spirit of The Moyer Foundation’s Camp Erin® and Camp Mariposa®, which meet the unique needs of children grieving the loss of a loved one or dealing with family addiction. 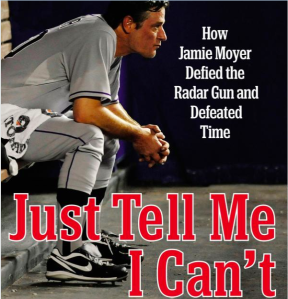