HBO Documentary Films‘ “One Last Hug: Three Days at Grief Camp” featuring Camp Erin has WON an Emmy for Outstanding Children’s Program!!! Huge congrats to all involved including the team at HBO, Our House Grief Support Center, New York Life Insurance Company and most importantly, the children and families who bravely shared their stories to make the film possible. 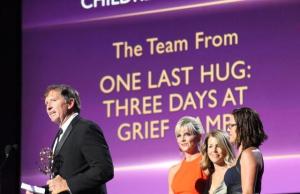 This film really is something special and is so deserving of the Emmy! If you haven’t see it yet, please take the time to watch and share it with your friends and family. Shortly after I viewed the film, I wrote about what it meant to me being a parent of 2 children who have gone to Camp Erin in the past. Below is what I said:

I’ll never forget the first time I dropped the kids off for Camp Erin. It had been just months since their dad passed away and it was the first time since his death that they would be away from me for an entire weekend. No phones, no email, no texts, no contact. I had no idea what to expect and neither did Kyle and Eve. All we knew was what our hospice counselor told us and what was written on the standard-looking brochure. We didn’t know anyone else who had gone to “grief camp” before and I think it is safe to say, we were all a little scared, worried, concerned, unsure…you get the point.

Well, despite all the fear, doubt and hesitation, we all managed to make it through that weekend – and happy to say that we will never, ever be the same!

You have heard me, time and time again say that camp changed our lives for the better. I say that because when I picked my kids up that Sunday afternoon, I saw something in their faces that I hadn’t seen in quite some time. It was RELIEF, it was HAPPINESS, it was COMFORT, it was PEACE. It was so many wonderful things all wrapped up in their beautiful smiles that told me that something pretty amazing happened that weekend – something that gave them the strength to live life with peace in their hearts.

I must have asked a million questions on that drive home. I wanted to know so badly every little detail about the weekend. They told me all about the opening ceremony where they introduce themselves and tell the group about the person who died. They told me about the remembrance activities, the dance parties, the games and the camper cabin contests. They even told me a little about the “top-secret” luminary ceremony when they placed a candle on a raft in memory of their dad and sent the raft into the middle of the lake.

Their stories and their smiles gave me such comfort knowing that I had made the right decision to send them. And although I loved hearing all about camp, I had always wished I could have been there to really see how these kids transformed in the course of one weekend.

My wish finally came true when I got the news that HBO films had produced a documentary about Camp Erin. “One Last Hug (and a few smooches)” follows campers through grief camp for 3 days in an effort to highlight the effects of death and grief on children. The film features campers from Camp Erin, Los Angeles and gives us incredible insight into the healing power of connections and knowing you’re not alone.

I had the pleasure of attending the private screening a few months ago and decided to bring my 14-year old son, Kyle with me. Honestly, I was a little hesitant because I didn’t know if I could handle seeing these kids go through this grieving process – it hit too close to home. And for as much as I wanted to know what went on at grief camp, I didn’t know if I wanted to see what my very own children went through. I knew there would be some really tough parts so I wore my waterproof mascara, brought my tissues and hoped that I’d be able to make it to the end.

It was hard to watch – I’m not going to lie. Seeing the pain in their faces and hearing these kids talk about the ones they lost is heart-wrenching. And as if I wasn’t having a hard enough time on my own, my son leaned over right before the luminary ceremony was to take place and said, “Ok mom, this part is going to be really tough.” Tough was an understatement – my mascara didn’t stand a chance!

But the beautiful thing about Camp Erin is that for all the grief and sadness, there is so much life and happiness! The joy these kids experience by connecting with other kids like them is absolutely priceless and is something you have to see for yourself. Watching the film, I got to see how these kids lift each other up – no questions, no explanations necessary. They play, dance and laugh together in a way that goes far beyond a brand new friendship. It is simply what happens when you know deep down that someone “gets you” when you don’t have to say a single word.

I encourage all of you to watch. It’s heart-warming and heart-wrenching but so completely worth your time. I ask that you also help to spread the word about the wonderful, powerful work of The Moyer Foundation and their partners by asking others to tune in. Together, we can give a bigger voice to childhood grief and let these kids know that there is Comfort, Hope and Healing and brighter days ahead!